Aoyama | Meguro is pleased to present the first solo exhibition of Oliver Beer in Japan. Beer is the winner of the Daiwa Foundation Art Prize 2015, selected from more than 800 initial applications.

Oliver Beer was born in 1985, Kent, United Kingdom, and currently lives and works in Paris and Kent. A holder of double degrees in music composition and visual art, his project focused on the resonance between architecture and human voice has been presented at Palais de Tokyo, Centre Pompidou and MoMA PS1 amongst others, gathering increasing attentions in recent years. In Japan, his work has been exhibited at “Condensation” (2014), organized by the Hermès Foundation.

This exhibition will provide a survey of Beer’s extensive practice, conceived through his exploration of vision and sound. It includes: Life, Death and Tennis (2015), his new film edited from the televised Wimbledon final; Silence is Golden (2013), glass spheres each of which contains a gold replica of one of the ossicles; This is a Churchwarden Pipe (2014), a bisected tobacco pipe. Head of the prize jury, Jonathan Watkins remark: “Much of Oliver Beer’s work embodies absence.”

The exhibition is co-hoted by ASAKUSA, a new exhibition space that opened in Asakusa, October 2015. Please take your opportunity to visit both exhibitions.

Much of Oliver Beer’s work embodies absence. A new video work for this exhibition, Life, Death and Tennis (2015) comprises extracts from the televised Wimbledon final that saw Andy Murray become the first British men’s champion for 77 years. The editing is fast and hard-hitting, as we watch the players perform extraordinary athletic feats before a crowd gripped by dramatic tension. What we don’t see is the ball – literally, here, the point of competitiveness – because the artist has airbrushed it out of every shot, and so a tennis match becomes abstracted into an absurdist performance of all-too-human effort and emotion.

Beer is knowingly making reference to the finale of Antonioni’s film Blow Up (1967) in which a group of white-faced mimes play tennis with non-existent rackets and balls. There is silence, of course, as well as invisibility and this is especially pertinent as Beer is an artist whose practice has as much to do with sound as it does with visual experience.

The lack of sound in Life, Death and Tennis (2015) corresponds to the inaudibility that is the subject of Silence is Golden (2013), three spherical glass paperweights pressing down on a stack of paper. Each contains an actual-size gold replica of one of the ossicles of the middle ear, either the hammer, the stirrup or the anvil. Thus separated, these little bones, are seductively visual – gold attracts our attention like no other material – whilst being embedded in cold, crystal silence.

For This is a This is a Churchwarden Pipe (2014) the artist has embedded a bisected long-stemmed tobacco pipe in the plaster surface of a wall, so that we clearly see its shape and internal structure in section. The allusion to Magritte’s absence of a pipe – “ceci n’est pas une pipe” – is smart, as here we see the actual object as a two-dimensional representation of itself. The pipe thus becomes a drawing of a pipe, at once a pipe and not a pipe.

A clean sharp cut is both beautiful and cruel, as revealing as it might be destructive. Beer’s Modular Rail Sculpture (2014) involves two neat slices of train rail taken from a French “grande ligne”, polished to reveal the patinated traces of countless journeys, the movement of steel wheels on steel that take the weight of passengers on their way, eking out individual existences, each with their own stories, origins and destinations. The sculpture stands then as a kind of modernist memorial to lives that sped by, an oblique pointer to the absence that is the ultimate destination for each and every one of us. Elsewhere in the exhibition is Beer’s appropriation of the anamorphic skull from Holbein’s magnificent painting of The Ambassadors (1533), a well known memento mori, and so the fundamental proposition of his work couldn’t be clearer.

Oliver Beer (b. 1985, Kent, UK) explores the properties onf sound in relation to space and vision through shared emotions and perceptions. His diverse practice includes sculpture, installation and film projects, with a focus on the relationship between the human voice and architecture.

Being held at the same time:
Deconstructing Sound
ASAKUSA 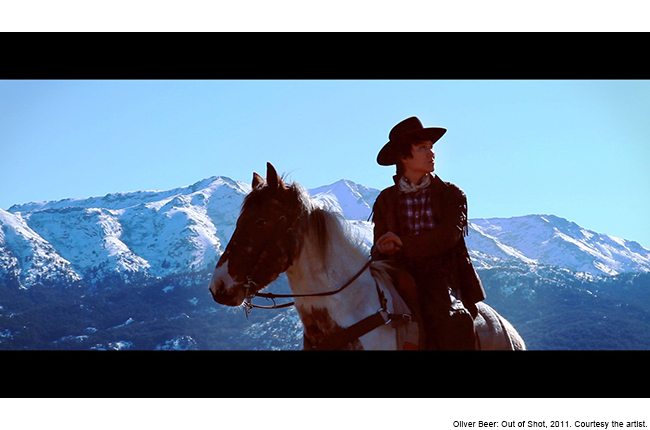