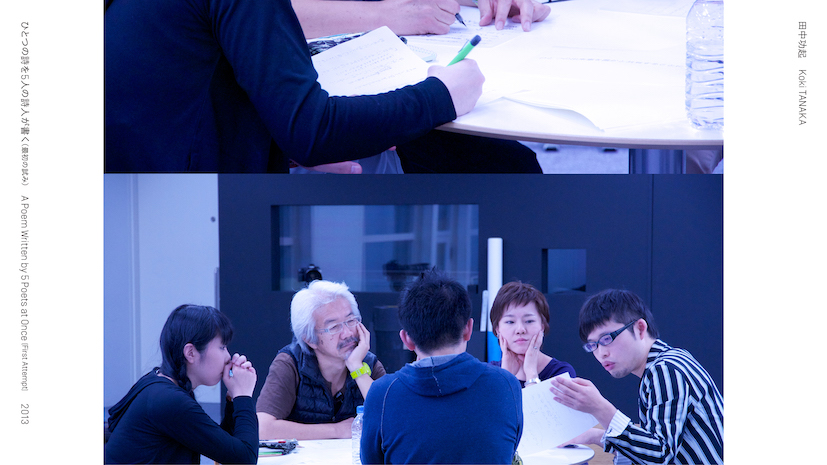 Koki Tanaka: A Poem Written by 5 Poets at Once (First Attempt) 2013

The video artwork which will be shown in this exhibition, “A Poem Written by 5 Poets at Once (First Attempt),” was produced in 2013 and has the length of 1 hour. Even though it has exhibited in a group exhibition, etc., I wonder how many viewers could appreciate the artwork.

The video may not have been appealing to everyone due to its length; also, its complex theme and the content itself could be other reasons. To be earnest, I am the one who had felt daunted at first look, and that feeling continued until recently. With the confidence that it was a good piece of work every time I watched the video, I also felt a sense of tension due to the seriousness and solemnity of the artist and the participants.

The artwork showed the difficulty in creating relationship among individuals; the participants tried to do their best for showing respect, listening carefully while being adamant, and giving some space, to the others. Nonetheless, these attempts did not always turn out to be successful. It was likely that such atmosphere of sincerity and thoroughness of the recorded details gave me unusual awkwardness and prevented me from sufficiently accepting the content. Also, I felt a pressure by watching their careful behavior which seemed to reject any careless comments. (My misconception, maybe.)

Nonetheless, Tanaka continues to pursue this kind of approach even further.

It seems that, during this period, Tanaka’s basic idea regarding success and failure made a notable transition by focusing on “strong possibility of failure (e.g. ‘Precarious Tasks’ series)” which primarily had been “non-existence of failure and ending” and subsequently was “importance of the mixture of coincidence and inevitability (with 50% chance of success, nonetheless).”

Tanaka’s attitude reminds me of the fact that readability of a book and smoothness of an alcohol are not always their priorities.

Also, I have always had a desire to exhibit his video in our gallery. Despite of the repeated planning, the idea did not realize while having felt that there were elements which did not work very well.

Aichi Triennale 2019 was held during this summer.

Tanaka’s new work “Abstracted / Family” was a project which was meticulously designed and prepared for the international art festival. Its outcome was apparent not only in the content of the video, but also in the arrangement of the entire installation in which several exhibits were incorporated such as the abstract paintings produced in the video. Actually, his concept was evident even in the unusual words and gestures expressed by the participant of assembly which was held several times during the festival.

In the early period of the Triennale, organizers decided closure of a section entitled “After ‘Freedom of Expression?’” due to censorship pressure. In response to it, Tanaka issued a statement and expressed his intention to protest by “resetting the frame of the artwork,” and toward the end of the festival, restored it to the former state with the reopening of the section.

While the exhibits were altered by artists and the situation continued to change, the attitude (statement) of the artists and their artwork could have been considered separately even though these two factors came from the same individuals. However, while being sympathetic or puzzled by the circumstances in which the artists’ attitude and artwork interacted with each other, the censorship issue might have influenced my attitude as a viewer, provably same as many audiences and onlookers. On the other hand, there were people visited the festival without any concern and simply enjoyed the exhibits.

We all see things differently while being in the same place. Our perception regarding a single fact varies greatly from person to person.

After this experience, I noticed that now is the right time to exhibit Tanaka’s video artwork in our gallery.

Actually, I do not feel awkwardness any longer while watching the video. More or less, we ordinarily have opportunities to spend time with others who have different sense of values or who cannot get along with. In this video, viewer can find the individuals put in such a situation; they try to communicate with others while keeping distance, show differences in degree of commitment, and behave variously.

You can watch the video alone, or bring someone to share the experience. If you do not have enough time, you can come again.

Please take this occasion to appreciate the video artwork by Koki Tanaka.