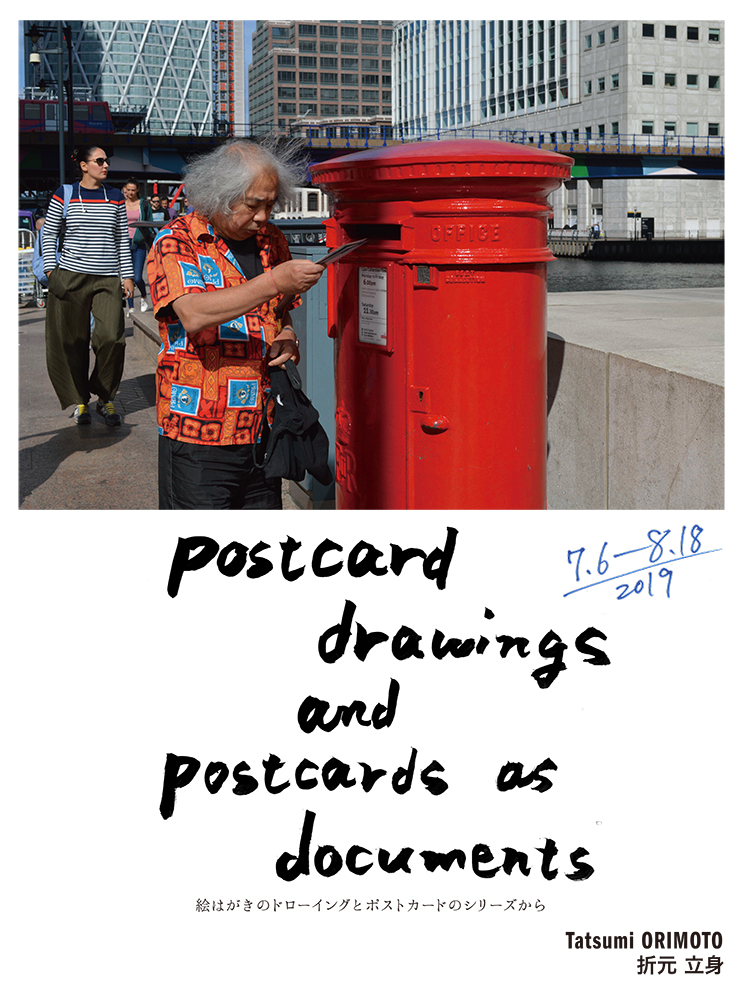 The last year’s solo exhibition “Past & Now” at Onomichi City Museum of Art was an attempt to showcase the entirety of the artist’s activities up to the present by classifying them into six categories.

Orimoto is known for his representative works such as “Bread Man” in which he wrapped loaves of bread around his head, “Art Mama,” a collaborative work with his mother Odai, and “Grandmother’s Lunch” project in which he invited a lot of elderly people to have a lunch together; however, in this exhibition, two series of old and new mail art projects that have not been shown comprehensively, will be exhibited.

The first is a mail art series in which he created a drawing with a message on a postcard that he got while traveling and sent it to people close to him. His innocent drawing and intimate message on his journey stages a meeting event with its receiver. On this occasion, recent postcard drawings that were sent to his late mother from Berlin and London will be exhibited.

Another series is the postcards as documents of his many artistic performances and actions. After these temporary activities, Orimoto has produced printed materials such as posters and leaflets for the record, and delivered them by himself to his acquaintances. In particular, during the 1980s, the early period of his career when printing costs were expensive, Orimoto produced postcards to document his activities. These small-sized postcards contain the information and related figures that can tell us much about his past artistic activities. In this exhibition, the entire collection of these postcards (approx. 180 works) will be exhibited through catalogues which contain their real-size images and actual pieces.

A notable characteristic of Tatsumi Orimoto’s art is that he employs and maximally utilizes the long-established, simple and familiar communication system that has been shared by many people in the world as material of his expression: postcard, a small support medium; a mailbox, a small architecture in a public space; and a mail delivery system running across the planet.

Please do not miss this opportunity to see this unknown series which will be exhibited for the first time.