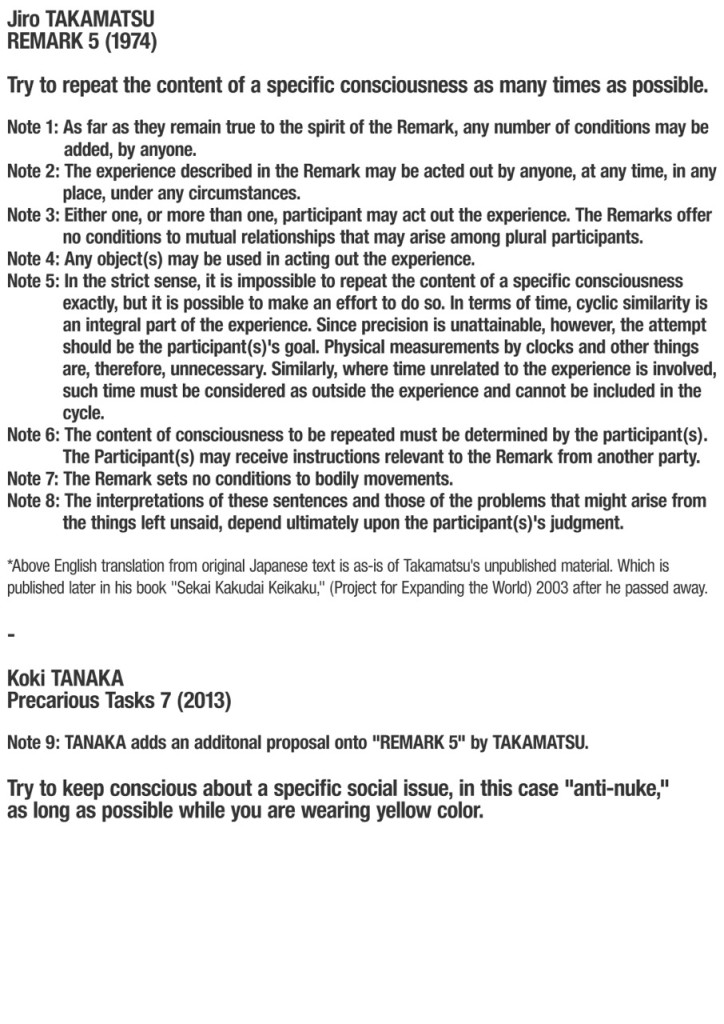 – Try to keep conscious about a specific social issue, in this case “anti-nuke,” as long as possible while you are wearing yellow color.

– This is seventh edition of “Precarious Tasks”.

I prepare yellow cloth and pins that participants could cut out and wear it. And for this time, I will reuse Jiro Takamatsu’s instruction piece called “Remarks” (1974) as interventional approach. Takamatsu was not so much political in 60’ 70’ regarding in his art practice, but I try to connect his approach to recent Japan’s political awareness and update a way of using alternatively. After wearing yellow participants are free to stay or go out. Of course I will be at the place all the time. It also depends on each participants how long they keep to wear it or not. They may take it out sooner later or just throw them away, which is also up to you. You might be asked someone about what that yellow means. How do you response them? You may describe it or dodge it. There are few drinks and place to sit down and talk with someone. Feel free to come and join us!

– For Participation: It’s free to come and go. Even if you don’t want to do an action but would like to see someone does, still welcome to join us. *We serve few drinks but you are more than welcome to bring something. **I will take a picture as documentation and it would be shown in future presentations.

–Artist’s Notes: Many Japanese participate the protest for nuclear power plant since its explosion at Fukushima in 2011. Every Fridays are the day for protest in front of the Diet Building in Tokyo although it passed already more than two years. But of course we couldn’t participate every Fridays for this, even if we wanted to. We have our life, our everyday job. However I wonder if there is any way that we just live our life and participate the protest at the same time. Since I live in LA, I cannot participate Friday’s protest movement in Tokyo. I just felt distance. But Kenjiro Okazaki, leading Japanese artist and thinker, tweeted a proposal when anti-nuke plant protest movement was getting bigger 2012 in Tokyo. He said “even if you couldn’t join the protest at the site, you just ware yellow t-shirts or so to show you are also protesting wherever you are.” yellow is the symbolic color of anti-nuke protest in Japan as same as German anti-nuclear plant protest movement. This could be a key idea about how we live our life and participate the protest at the same time wherever we are. Therefore this is a proposal of our awareness of such thought in our everyday is important. We only need to keep aware of protest participation in our everyday. If we do so, our everyday itself would become a political action. For such awareness of our everyday, I’d like to invite historical artwork. Jiro Takamatsu(1936-1998), one of most influential artist from post-war Japanese art, was curious about how we could have fresh eye out of our daily routine. One of his instruction piece called “Remarks”(1974) is suggesting us to escape from our routine regarding our body and mind. So I reuse his universal idea to connect and update Japan’s 60’ 70’ political moment to the present moment of recent Japan’s political awareness.

– reference: Jiro TAKAMATSU “REMARK 5” (1974) “Try to repeat the content of a specific consciousness as many times as possible.”